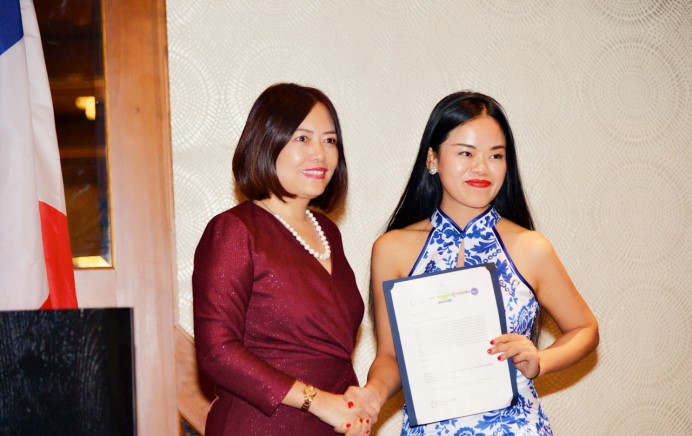 October 15th, 2019, the Permanent Mission of the African Union to the United Nations, New York, hosted a high-level conference with royalties, diplomats, corporate leaders, and academics to observe and assess the state of Global Corporate Social Responsibility (CSR) as it coincides with the Sustainable Development Goals (SDGs).

The Conference, titled, Dignity of Rural Women and the Social Responsibility of Global Corporations, took place from 1pm-6pm inside the Nelson Mandela Conference Room under the auspice of the Mission of the Federal Republic of Sierra Leone. The purpose of the conference was to recognize the critical role and contribution of rural women in enhancing educational, cultural, and rural community development, improving food security, and eradicating rural poverty.

Executive Chairperson of the Summit and the CEO of Global CSR Foundation, Jing Zhao Cesarone, made the opening remarks at the conference at the Permanent Observer Mission of the African Union to the United Nations.

Ms. Tianmei Chen, the founder of a fast-growing woman empowerment online academy in China, led 12 Chinese women entrepreneurs from various areas to attend the summit. This is the second time Ms. Chen has made her voice heard at the UN, the first time following the Orientation of the 63rd United Nations CSW Conference in March, 2019. Tianmei stated that her “main purpose is to represent Chinese women, speak for, and empower women from all walks of life and all over the world by supporting rural women and furthering sustainable development globally.”

Ms. Chen was appointed as the Co-chair of the Youth Leadership Committee of the Global Corporate Social Responsibility (CSR) Foundation by Jing Zhao Cesarone. The appointment serves both as a recognition of her achievements, and of her commitment to engaging in global youth leadership development.

Jing said, “Tianmei stands out as a powerful and dedicated young leader with global vision. I believe she will serve as a strong voice to engage more young global leaders to participate in the foundation’s sustainable initiatives and make a real difference in the world.”

Tianmei was born in a rural area in central China, but it didn’t stop her from exploring the world. She remarked, “Cosmic Citizen aims to empower more than 100 million Chinese women to see the world and show the world a new generation of Chinese women.”

Dr. Dwight N. Hopkins, board member of Global CSR Foundation and the professor at the University of Chicago, said of Tianmei and her group, “the energy you exude and the superb entrepreneurial success you exhibit are inspirational, Cosmic Citizens are pioneers for the 21st century.”

Guest speaker, his Royal Majesty King Adedapo Aderemi the Alayemore of ldo Osun of Nigeria, singer Yeye Osun of Modakeke, and Florence Trautman spoke highly of the group and they wanted to learn from Cosmic Citizens to empower women not only in China and Africa but also all over the world. Tianmei responded, “Woman empowerment is a great task. Together, we can make greater changes happen, leaving no one behind. ”

COSMIC CITIZENS is one of the largest platforms focusing on teaching and incubating self-growth and empowerment for Chinese women. It aims to help more Chinese women to become more confident and global-oriented with a fast growing global e-community where they can learn, empower and grow together. It is currently influencing women in more than 14 countries.

Mei (Tianmei) is a passionate public speaker, an empowerment coach and a creative individual with an international outlook. She was the first Chinese woman entrepreneur selected as a Chevening Scholar by the UK Government.